At the recent meeting of the Foxboro Art Association, I pleased to find out that I was awarded a ribbon for my painting Blue Bomber. This is a painting of some of the junk trucks found in the old mine outside of Jerome, AZ. 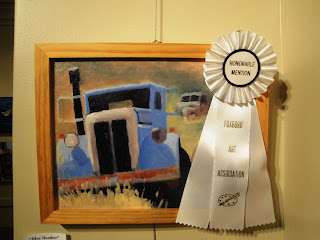 Blue Bomber
9x12
$125
See the post below related to Perc Cup cafe for a picture without the ribbon covering half the painting.
Several of my friends also won ribbons. Frank Quinn 1st Place in oils, Nancy Bacevich 1st Place in pastels and Haydi Hurley Honorable Mention in watercolor. Our teacher, Kim Weineck was quite proud of us.
Posted by Tony at 10:27 AM No comments:

Cindy Baron at the FAA

This month's demonstrator at the Foxboro Art Association meeting was Cindy Baron. She is a member of the American Watercolor Society and teaches water color classes at the Rhode Island School of Design. She also is an accomplished oil painter. Her demo was in oil. Cindy is originally from Indiana where she had some notoriety for her paintings of barns. Now that she is living on the east coast, she has become the painter of rocks. She also travels extensively and has many works depicting the inspiring landscapes of the American west and southwest.

She is a "plein air" painter and usually works on 8x10 canvases when painting outdoors. She believes that painting outdoors is one of the best ways to properly see things and to grow as an artist. She stretches the canvases herself and grounds them with a brown mixture made up of most of the colors on her pallette. When working in her studio from a reference, she will use that "brown" mix to do her version of a value study.

This is the process she demonstrated on a seascsape with a crashing wave. This process was new to most of us and we were anxious to see how it would turn out. She brought with her two other fairly large canvases of similar scenes that were already blocked in with this method so the audience could see the direction she was heading. She covered the canvas with a mid-value of the brown mix and then proceeded to wipe off areas to indicate the sky, the large wave or the faces of the rocks. She would add back in darker browns where necessary to indicate the darker areas of the seascape. Then, using a rubber tipped tool (pastel blending tool), she carefully drew in more detail. She was especially concerned with the cracks in the rocks. She said to indicate some key cracks, but not all of them. Less is More. She was also aware of the length and direction of the cracks and made changes to them so as to not lead the eye of the observer right out of the painting. She made sure there were some cracks to lead one back into the picture. She added darks, wiped out areas and drew in more detail until she reached a point where she would normally let the canvas set up over night to dry.

After an hour or so, she had a pretty complete and well done value drawing. To demonstrate this next step in the process, she used one of the other value sketches that she brought with her. She takes her time with her paintings and keeps working on things until she feels she has it right. She uses the obvious techniques of squinting and stepping back, but also relies on a large mirror in her studio for her reality check. She spent most of the rest of the time working on the rocks before adding a few bright highlights to remind her where the center of interest was going to be. She made sure she had some of the sky color in the rocks and the rock and sand color in the rolling water. Here is a photo of the rocks. 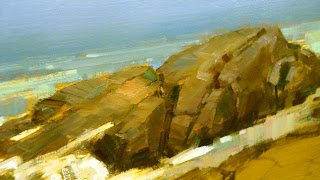 She will continue to work on the rocks, foreground, ocean and horizon line until she is satisfied. She plans on this painting being one in a series of 3 paintings of the rocky shore near her home in Rhode Island. We all look forward to her final results.
Posted by Tony at 10:45 AM No comments:

Welcome to my Art Gallery and Blog

Thank your for visiting my Art Gallery. Click on any of the tabs, above, to visit specific galleries. Also, please feel free to follow this blog as a member (it doesn't cost you a thing) or make a "Comment" on any of the "posts" to let me know you stopped by. If you have any questions about or interest in any of my work, please click HERE to send me an Email

How Many Have Visited

How did they get here!