If you are like me, you are going a little stir crazy due to the Coronavirus Pandemic. For our own health we are staying away from any groups, even small ones, and most small businesses are closed. I I currently have an exhibit at the new Reverdy Gallery at the Everleigh Development in Hyannis and wanted to video the exhibit for my own benefit. But, did I mention, it's closed.

So, if you want to get away from the house for a bit and take a virtual tour of the gallery, come on in. Pretend you just picked up a glass of wine. I'll show you around and tell you about some of my paintings. 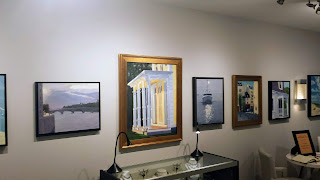 The gallery is owned by Kalyn McCuch and Cris Reverdy. Kalyn runs the day to day operations. For those of you who attended my Opening (thank you), you know that there are actually 2 galleries. An enclosed room for one artist and the a large open space for another artist. I have close to 30 paintings hanging there. But, don't worry. I won't bore you with details on every one of them. 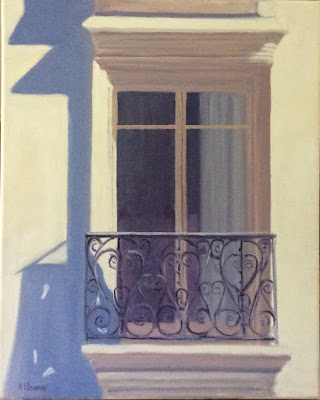 Kaylin did a terrific job hanging all the paintings.
Hanging them is an art in itself. I'll go through some of them based on subject matter.

This first one is called, A Paris Balcony. I took a photo of the building across the street from an appartment we were renting. I love the architecture of the buildings in Paris. This was the work of Baron Haussmann, who tore down old neighborhoods, displaced 1000's of people, widened the streets and designed and built the new city. 150 years later it hasn't changed much.

It really was the purplish shadows that struck me first along with the light on the typical Parisian grillwork.

This painting was actually from a close up from a photo I took from inside our apartment. I call this one 4 Windows. Part of the design of the Haussmann buildings was huge nearly floor to ceiling windows that let in a lot of air and light. They also let in a lot of street noise.


This painting was from a Daily Challenge from Carol Marine. It's called Market Day in Provence.I wanted to make sure I captured the woman's posture as she loaded up her pan with fresh fruit. Maybe the husband was adding his 2 euros for the selection. 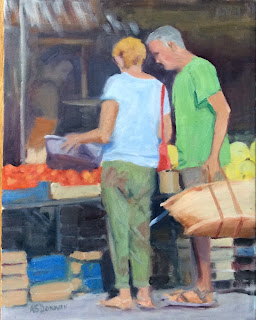 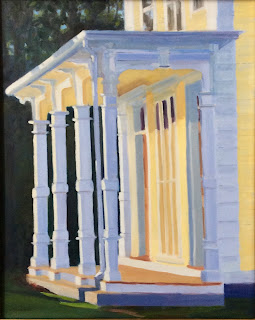 Back in the states, I still like to paint things that have some sort of structure. What would have more structure than an old wooden building with a columned front porch. I call this painting The Yellow House. This house is a actually a building in Barnstable near what was the Barnstable Tavern. In the late afternoon, as the sun gets a bit lower on the horizon, amazing lights and shadows are created. I bet you've driven by it many times. 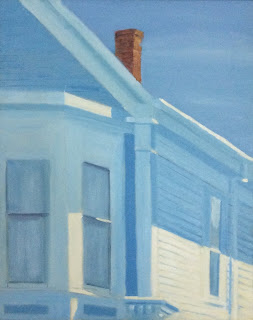 This painting I call House of Blues. My reference was a photo of downtown P-town on a very bright day. I cropped the photo to zero in on a building in the background which was mostly in shadows. The sun was nearly directly overhead so it threw bright light on parts of the building. Maybe I overdid it with the blue paint but that's what the shadows looked like to me.

Here's a street scene from Wickford Rhode Island. I painted this one "pleine aire" and wanted to catch the bright light on part of the building and the shadows on the street and house at the end of the road. This one is called The Crooked House. 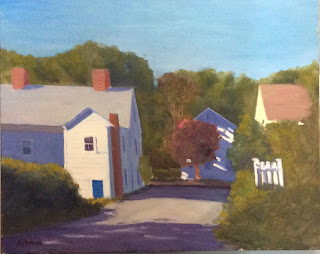 Moving away from buildings to boats... This is called Docked. I blew up a photo of a larger pier with this boat tied up to it. I loved the reflections in the water and color of the wood. It was perfectly calm as it sat in the water waiting to be taken for a ride. 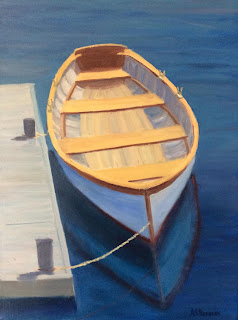 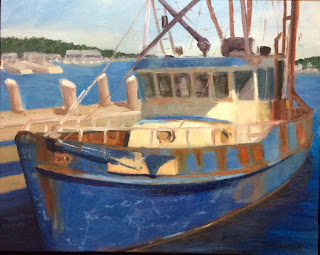 While manning a shack at the Hyannis Shantys, I had plenty of time take in the sights. I set up my easel and started a painting of a rusty old boat that never seemed to move from its mooring. I think it is the Cap'n Chase. What struck me was, once again, the lights and shadows on the boat as well as the red rust rolling over the sides 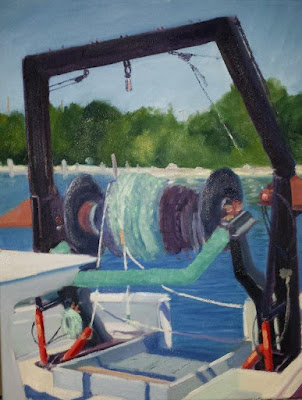 This painting is called Wound-Up. While painting with friends on Jamestown Island, I took a break from my seascape and walked around the park. I came across one of the State of Rhode Island Fisheries' trawlers docked near the harbormaster's building. I was immediately struck by the colors at the stern of the boat. The hull needed a paint job but the stern was just alive with red, green, blue and terrific shadows. I went back and retrieved my easel and started to block in the back end of the boat. I got off to a pretty good start but decided to take a photo and finish it from my reference. I spoke to one of the engineers/students who go out in the bay to measure water temperatures, etc. He said I was lucky as the boat was going to go into drydock the next day to be repainted and overhauled. I was happy I stumbled on the scene. 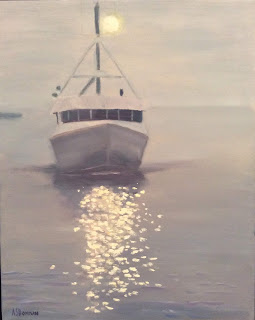 This painting is called, In From the Fog. I woke up early one rainy morning and decided to go to the canal to fish. We had a visitor staying with us who said all she wanted was fresh fish. So, I thought I would give it a try. Within a few minutes, I caught 3 stripers (kept one) and had a good sized fish to bring home for dinner. As I was packing up to leave, I saw a boat approaching the bulkhead where I was fishing. I waited a bit until it came into view from out of the fog and snapped a photo to use as a reference. Only later did I find out it was one of the boats owned by Fishermen's View. And our guest was pretty impressed that I was able to provide fresh fish on demand. (hasn't happened since)
One day at the end of a snow storm, I drove around town and came across this scene at Russell's Corner. The storm had just passed out to sea and the sun was coming out behind it. There were still storm clouds in the sky but the sun was casting shadows on the buildings and the street. This is called After the Storm. One of my favorites 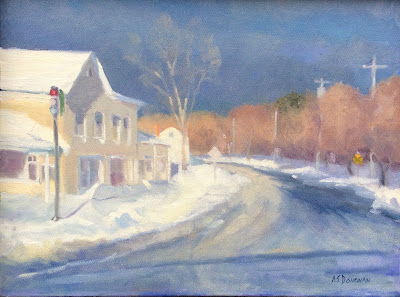 This painting was submitted to the 100th Anniversary show at the Canal Visitor Center. All of the paintings submitted had to be about the canal. No beaches, no hydrangeas, just Canal. I ride my bike along the canal a lot and see tons of people fishing and tons of tankers working there way through. This one is titled, Working the Canal. One man fishing and the tanker on her way east, both working the canal. 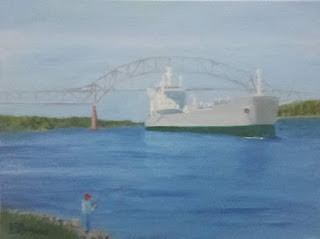 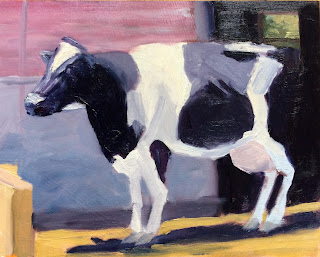 I also like to paint animals. When vacationing in the southwest, I've done a lot of cattle and horses. Back east I have to search a little for my subjects. I found Lucille, black and white cow, at an open house at the Norfolk Aggie School in Walpole. It was a great spot for livestock. Not sure why I came up with the title, Lucille. It just struck me. 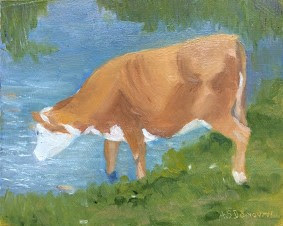 Each year, we go to Williamstown Ma for their theater festival. We stay in Bennington Vt at the Southshire Inn, a beautully restored New England B and B. (If you go there, tell Joyce that I sent you). Anyway, travelling back and forth from here to there I come across many photo ops that I eventually want to paint. The Water's Fine shows on cow testing out the waters to cross a small creek.


Ok, so this one I just made up. I tried to capture the movement and some of the color of a striper in action. This one I call, On the Hunt. I really enjoyed painting this as it is very loose and was completed very quickly (at least to my satisfaction.) 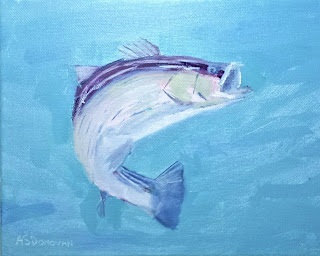 We have spent a fair amount of time in Sedona where we rented a house for a few seasons. I painted with some of the well known Sedona artists and took a few workshops while there. One of the favorite places to paint is the Gold King Mine in Jerome. Jerome is an old mining town about 15 miles south of Sedona. I have set up my easel and painted many old trucks and cars that are lying around. This one is Blue Bomber. There is no lack of interesting vehicles to paint if you like that. I do. 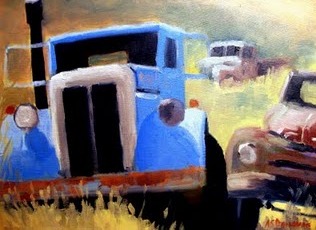 I always keep my eye out for any interesting scenes while driving. I spotted these 2 junks down a dirt road on my way to Williamstown. I backed up and walked down the path to find Rust in Peace along with a few other rusting vehicles which I have also painted. It's fun to try to guess the model and year of the cars based on the doors, chrome trim, etc. 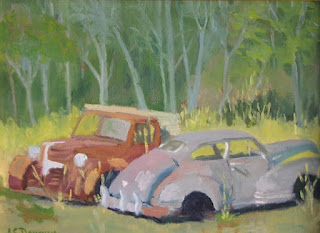 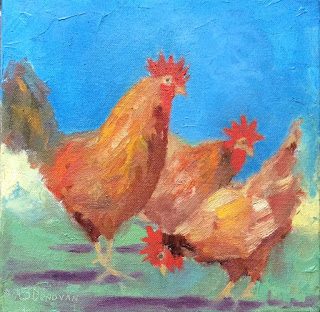 This was a fun exercise in using lots of color and paint. I really wanted to lay it on thick and paint very quickly. I did both. You can see some of the thick paint in the top left corner even in this photo. This was a lot of fun. I called it Fowl Play


I guess everyone in Sandwich has to take a shot at the Boardwalk. This is my 18x40 version of the boardwalk at close to high tide. It is a very peaceful spot to relax even when kids are jumping off the railing. It is also a great spot to go kayaking to explore the creek. You can paddle almost all the way to the town hall. 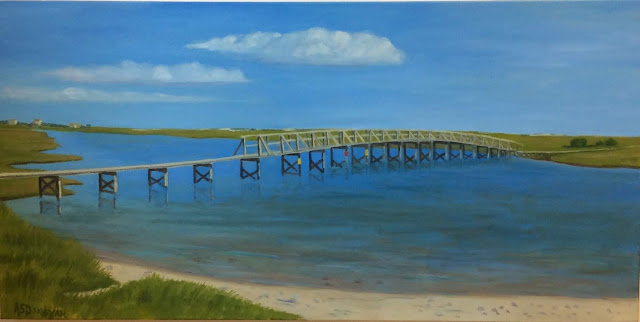 This is another typical Cape scene. Cape Escape. I always enjoy it when I climb up a pathway over a dune and catch sight of the ocean for the first time. I love it when I crawl up the dune at East Sandwich beach and the water comes into view. 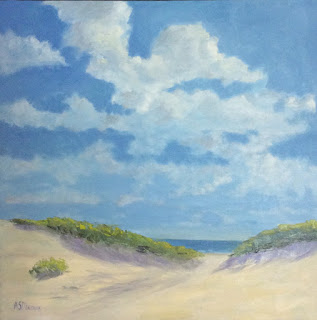 This painting is not in the show. But it is one of my favorites. I call it Bourne on the 4th of July. All the traffic heading over the bridge and no one leaving. One person said, "who would want a painting of traffic?". Another person said, "I've got to have it." And she does.

It's all in the eyes of the beholder 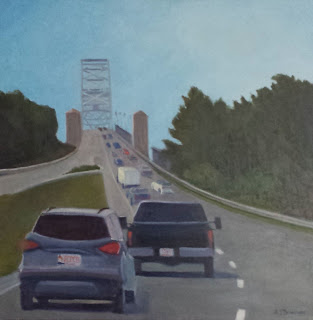 Thanks for stopping by!
Posted by Tony at 12:41 PM

I was planning on skimming through the paintings to see if there was one that caught my eye but WOW they are all lovely and the commentary delightful! Normally when I take photographs I focus on color and composition. I'm going to be paying more attention to light and shadows now as well. THANK You ! Your paintings are Beautiful.

Welcome to my Art Gallery and Blog

Thank your for visiting my Art Gallery. Click on any of the tabs, above, to visit specific galleries. Also, please feel free to follow this blog as a member (it doesn't cost you a thing) or make a "Comment" on any of the "posts" to let me know you stopped by. If you have any questions about or interest in any of my work, please click HERE to send me an Email

How Many Have Visited

How did they get here!